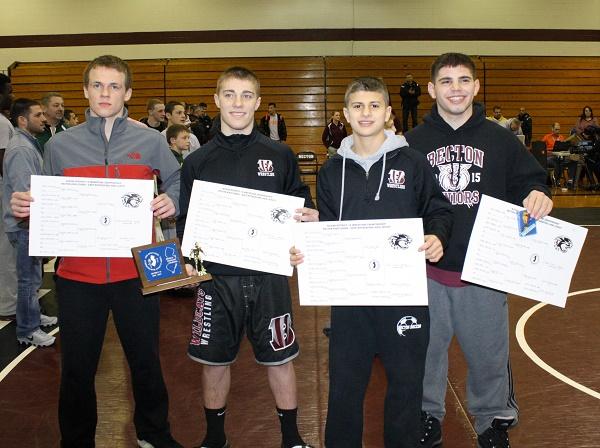 On February 21, the Becton Wrestling Team, under the direction of Coach Settembrino, dominated the mats and the scoreboard at the District 15 home competition. As a team, the boys collectively scored 165 points, which enabled them to beat Queen of Peace High School by a mere four and a half points. The two teams had the closest margin of victory out of all the 32 districts in the state.

Ten of the fourteen Becton wrestlers advanced to the semi-finals and six were able to advance to the finals. During the finals, four wrestlers were titled champions, Seniors Roy Forys and Dylan Lewin, Junior Rafal Kolodziej and Sophomore Phil Ruiz.  Junior Michael Cabrera and Sophomore Jordan Colon placed second and placing third was Senior Kelvin Carino.

This Saturday brought numerous titles and accomplishments for the boys. This was the first time Dylan Lewin and Rafal Kolodziej earned a title in their weight class. For Phil Ruiz, this was his second District Title in a row.

Next week, the top three ranked wrestlers will compete at the Regional Tournament in West Orange.

Roy Forys is currently tied with Becton Alumni James Dugan for the most career wins with 136 wins. He is hoping to beat this record during the regional tournament over the weekend.

Roy’s most memorable accomplishments are “being three times District Champion, four times County Place Winner and advancing to Atlantic City my sophomore and junior year,” which he is hoping to also achieve this year. Roy will continue to wrestle at Wesleyan University.

Dylan Lewin is still undecided if he will be wrestling at the collegiate level. Lewin notes, however, that, “the tournament was amazing and everyone did better than expected. We topped off a great season by winning both the Districts and League Titles. It was definitely a great way to end my final season.”