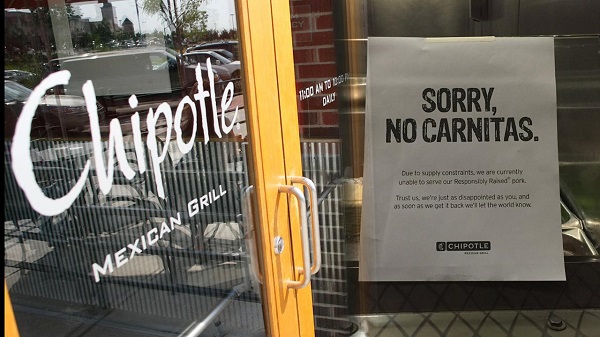 After a routine audit, the trendy fast-food chain discovered that one of its pork suppliers had failed to attain the company’s Responsibly Raised standards.  Chipotle’s animal welfare philosophy, Food with Integrity, encourages the humane treatment of animals, and much of its products are free of genetically engineered ingredients, hormones, and antibiotics.

For the pork industry in particular, pigs are expected to be raised with outdoor access and bedding.  However, only a small percentage of breeders follow these guidelines; in fact, most pigs are raised in compact gestation crates with concrete floors and fed antibiotics to avoid illness.  The demand for pork raised with access to open space and proper bedding is rising faster than farmers can keep up with the pace.

“We would rather not serve pork at all than serve pork from animals that are raised in this way,” said Chris Arnold, spokesperson for Chipotle Mexican Grill.  He also shared that pork, referred to as ‘carnitas’ in the restaurant chain, accounts for about 6 to 7 percent of entrée orders, and sales will stay halted until the company finds a way to remedy its shortage.

With the vast number of servings Chipotle sells in one day, using different cuts of pork and increasing orders from other suppliers are major considerations to help make up for the shortfall.  So far, the company has started testing the possibility of using loin instead of shoulder, and it has boosted its shipments from its largest supplier, Niman, from 15 to 20 percent.

Chipotle declined to name of its suspended supplier because the restaurant is attempting to work with the supplier and help bring their operations up to the Responsibly Raised criteria.  According to Arnold, the chain hopes that the unidentified supplier eventually “comes back on board,” so Chipotle can fully resume its carnitas sales.