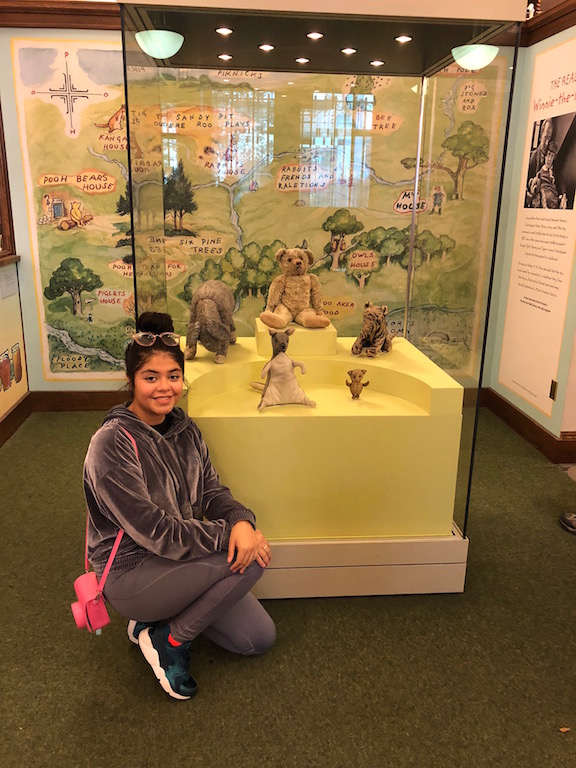 Mr. Bononno, a former Becton history teacher for 29 years and current acting vice principal of the high school, left his students with a top ten book list that everyone should read during his/her lifetime before exiting the classroom this year. At the top of his list is the storybook classic Winnie-the-Pooh.

Mr. Bononno believes that reading the childhood fiction as an adult is beneficial because as people mature, their views tend to change.

“This book is about lost childhood or holding onto that special place. I was talking about regardless of how old we are, we can still maintain the innocence and wonder about the world around us,” he said.

The Becton administrator also informed his classes that The New York Public Library has an exhibit called The REAL Adventures of Winnie-the-Pooh, which includes all the puppets on display that belonged to Christopher Robin and illustrations that help retell the story.

The story of Christopher Robin is a sad tale about an author who had a challenging life and a strained relationship with his son. Christopher Robin resented his father for sharing his story with the world, and it was not until years later that they reunited.

“Something beautiful came out of something horrible, so I think there’s a lot of great lessons about pursuing life and not getting jaded,” said the former history instructor.

After enthusiastically informing the students about the exhibit, Junior Monserrath (Monsie) Martinez decided to visit the display.

She felt especially inspired by Mr. Bononno’s excitement and took a trip to New York City with her mother to see the authentic stuffed animals given to Christopher Robin in the 1920s. “He ended up telling us the real tale behind the series, and I thought it was interesting. He advised us to go to The New York Public Library and visit the childhood display to read about it.”

“Mr. Bononno teaches us numerous things about life and being a good person, which inspired my trip to NYC. I walked through the whole library, and it was really amazing,” said Monsie.

Prior to her trip, she did consider herself a fan of the book; however, now she has a newfound appreciation for the artistry. “From now on, this story will always remind me of Mr. Bononno and the way he inspires his students.”

Monsie recommends that all students take advantage of such a valuable experience.

“If I have an opportunity to inspire anyone it makes me feel great, but I want the students in my classroom to know that they inspire me one hundred times more,” Mr. Bononno stated.