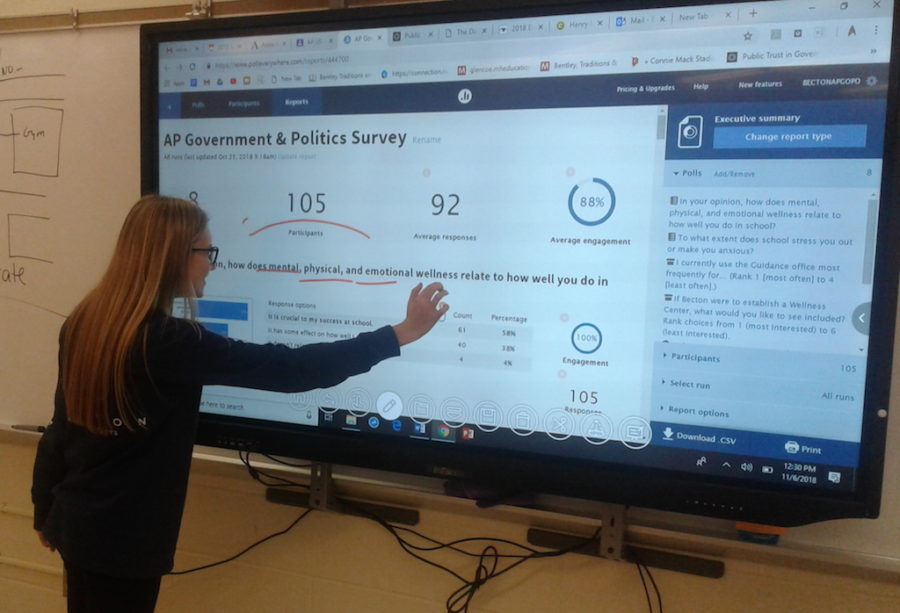 One of Mr. Carr's students takes the time to analyze the results of their poll.

Mr. Carr’s Advanced Placement Government and Politics class conducted a public opinion poll during the week of October 22. Students enrolled in the class were responsible for polling 105 of their peers on various topics, which included Homecoming attendance, the proposed Wellness Center, going out for lunch, school safety, and plans after high school.

“The polling project is designed for students to understand how polls work, the strengths and weaknesses of sample polling, and how polls connect people to their communities, governments, and one another. Polls gather data on how people feel about certain aspects of their lives, and the results can help the polling institution to better understand the people they surveyed,” said Mrs. Robitaille, Mr. Carr’s former student teacher. She then added how part of the project was for students to also explain the errors from the data they gathered.

Mrs. Robitaille mentioned that although she came up with the idea, the inspiration came from the overwhelming amount of polls that Mr. Carr uses in his class. “Under his guidance, the AP Government and Politics class developed sharp skills in interpreting polling data, so I thought it might be fun if they interpreted data from a poll of their own,” she stated.

Originally, the project was going to be conducted in a completely different manner. The students had the intention of surveying 100 people in two waves, fifty people from the first wave and fifty from the second. The method in which the conductor polled the first wave had to be different then the second wave.

However, a few complications arose with the first method, so as a collaborative effort, the class came up with polling every one of Mr. Carr’s classes in addition to Mrs. Lonergan’s eighth period class and Mr. Kuhn’s fourth period class.

Each student had to present the information to at least one class and would be scored based on his or her presentation, as well as answering any question the audience had. The poll was comprised of eight questions, five questions from the students and three questions made up by Mr. Carr and Mrs. Robitaille. In total, 105 student responses were recorded, and the subjects came from a wide range of grades.

Some of the questions were intended for Mrs. Gatto’s proposed Wellness Center, so she could get a better grasp for its intended uses, as well as the students’ sense of well-being and overall vitality.

“I hope that this project provides a framework for subsequent polls to help future students better understand one another, improve the relationships and interactions between teachers, staff, and students, and give students another way in which they can make their opinions known,” said Mrs. Robiaille

I would like to sincerely thank all students who participated in our poll and all the teachers who took time out of their busy instruction schedules to help the GoPo students better understand the polling procedure,” she added.