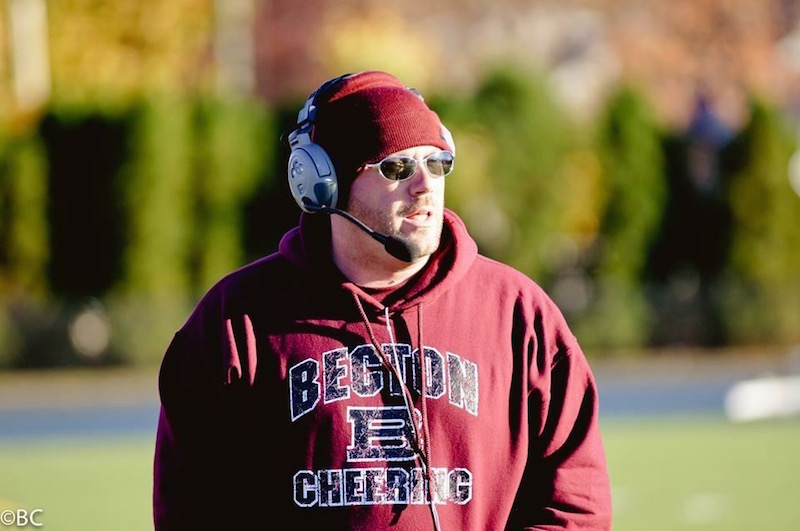 Mr. Jay Longo played Becton Football while attending the high school from the years 1994 through 1998.

Mr. Jay Longo will be continuing his 15-year coaching career by acting as a volunteer football coach for the Becton Wildcats. His career includes coaching the Junior Wildcats Football Team from 2003 to 2017. During 12 of those years, he fulfilled the role as head coach and led the junior team to a Meadowlands Football League Super Bowl Championship victory in 2014.

As a high school football coach, one of Mr. Longo’s goals is to learn the game at a more advanced level. “The biggest challenge for me will undoubtedly be adjusting to the change in pace and complexity of the game of football from the recreation level to the high school level,” he said.

Another one of his goals as a volunteer coach is to support the current coaching staff in any way needed. In addition, his focus as a coach has always been on the development of the team members as football players and teaching them life lessons through the game, which he said will ultimately lead to their development as young men in today’s society.

“Wins and losses will take place regardless of how you prepare as a team. Sometimes your opponent is simply better than you. Being successful means walking off of the field when the final whistle is blown knowing that you did everything you could for yourself and for your teammates,” said the football coach.

Mr. Longo is also excited to learn how an entire high school football season works. He believes that there is so much that happens on the coach’s end that goes unnoticed, such as meetings, film study, learning rule changes and applying them, and creating a practice schedule. Moreover, he is extremely grateful to be joining a staff that has been together for a few years and helping perfect that process. As a new coach, he noted that he will focus on doing what is asked of him by his fellow coaches to the absolute best of his ability. He does not want to be a burden as the new guy, so he will put himself in a position that will help the team be successful.

The motivation that drove Mr. Longo to coach football is the grind of the sport. He explained that the sport is not for everyone and that those interested in playing have to love it because it is highly demanding. He also loves the brotherhood and the bond that is created with the teammates and coaches throughout that grind.

Furthermore, Mr. Longo mentioned that he is already comfortable being the new coach because he coached almost all of the football players when they were in the Junior Wildcats Recreational Football Program. He will remain close with his players by demonstrating his love for the sport on a daily basis and being there for them 100 percent along with his fellow coaches.

“I want to thank the current Becton Football coaches for agreeing to allow me to join the staff this season as well as the Becton Administration for approving the move. I’ve been around the Wildcats family for 28 years, and to be able to say that I am a small part of the high school football program that I grew up in is a dream come true for me. I credit my high school football days at Becton Regional High School for helping me become the man I am today. I tell my players to appreciate the journey that you are on because the journey itself shapes you as a person, not the destination. My journey has led me back to Becton Football, the program that is responsible for some of the greatest memories of my life. I could not be more excited to join this amazing coaching staff and work towards assisting our current players in creating lifelong memories for themselves,” he stated.

Mr. Longo was a Wildcats football player from the ages of 10 through 13 and played all four years throughout high school.