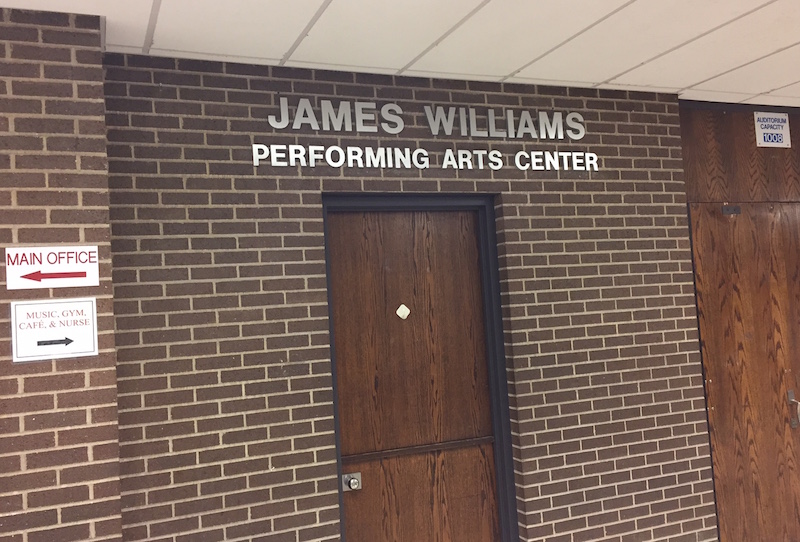 The unveiling of the James Williams Performing Arts Center took place on October 22.

Mr. Williams began his career as a science educator for the Carlstadt-East Rutherford School District in 1962 and retired in 2002. In 1962, the first of many plays that he began directing was Finders Creepers, a comedy-mystery by Donald Payton, along with directing a production of Men are Like Street Cars by Graeme and Sarah Lorimer later on that same year.

In attendance at the unveiling ceremony on October 22 were family and friends of Mr. James Williams, current Becton administration and staff, Becton Board of Education members, fellow retirees, community members and former students.

The event, which was planned, organized and hosted by Business Administrator Nicholas Annitti and Guidance Counselor Jonna Calvanico, began with Mr. Annitti thanking the Becton Board of Education, specifically Mr. Dennis Monks, who made the motion to rename the Becton Performing Arts Center after the beloved educator. He then noted that the rest of the board of education voted unanimously on the motion.

Ms. Calvanico also joined in thanking the board members and began the event by mentioning that she left the classroom as an English teacher in February of 2002, the same year that Mr. Williams retired. When she went on to become a guidance counselor, Mr. Williams gifted her a compass with an attached note stuck to it that read “to help you lead students in the right direction in your job.” “He really meant so much to me,” she said.

Retired science teacher Mr. Walter Siri, who worked alongside Mr. Williams for 37 years, was the initial person to speak. “You were Jim’s rock,” he said as he spoke directly to Mr. Williams’ wife, Carol. He then noted that his colleague was the first instructor to start the Physics Olympics at Becton and was a member of the first department to use overhead projectors, a piece of teaching equipment that Mr. Williams was known for utilizing in his daily lessons.

Next, Miss Carolyn Mezzadri, a former English instructor at Becton and 2006 retiree, stated how she worked with Mr. Williams for four decades. They both began their teaching careers in 1962. She referred to Mr. Williams as a “Rennaissance man” and “a teacher of the ages.” “His physics classes were full of joy and excitement, and the musicals he directed were beyond compare,” she said.

Moving on, former Becton administrator Mr. Donald Wernes recognized that Jim was quite a guy and that he left the students with an awful lot. He stated, “Many students went on to attend Ivy League schools, and I think Jim had a big part in that. I think the board of education should be commended for this honor.”

Former English teacher Mr. Robert Myers then went on to thank the board of education members individually and mentioned how he met Mr. Williams on October 1, 1968 during lunch in the men’s lunchroom in the old East Rutherford High School. He added how Mr. Williams was the first to direct two faculty shows, the first one benefitting a student who suffered paralysis from an accident, and he then detailed each one of the performances. “As a man, friend, father and teacher, Jim Williams was second to none,” he said. He expressed, “Meeting Jim was the beginning of a great friendship that would last over 50 years and continues in spirit today.”

Furthermore, former science teacher Mr. Robert Mead worked side by side with Mr. Williams both inside the classroom and outside of the classroom as his business partner. “We started a painting business, and for 35 years we had a lot of fun,” he said. He stated how “everything Mr. Williams did, he did with love.” For instance, he took over cross country and track teams at Becton and they won championships. Moreover, his plays were just phenomenal, he mentioned. “I was very lucky to have someone like him in my life,” he said.

Last but certainly not least, History Teacher Mr. Jim Bononno thanked Mr. Annitti for asking him to speak at the ceremony and noted how “Mr. Williams’ fingerprints are all over Becton.” “I learned from him to use who you are and be genuine to who you are, and people will learn the most out of that,” he said. He then ended his speech with the quote “Death ends a life, not a relationship” from Mitch Albom’s Tuesdays with Morrie.

Unable to attend the ceremony, former Becton superintendent Mr. Samuel Feldman, former principal Joe Toohey and former science instructor Ms. Dorothy Maggio sent their warmest regards. “Jim was a man of integrity and industry…a class act,” said Mr. Toohey. “As a student, I really learned so much from him. One of his greatest gifts to me [as an educator] was encouraging my leadership in the BEA union,” said Ms. Maggio.

Sam Kelly, a 12-year-old actor in the Spotlight Playhouse production of the musical Oliver!, which was performed immediately after the ceremony, began to wrap up the commemoration by singing “Where is Love?.” Oliver!, based on the Charles Dickens novel Oliver Twist, was one of the many productions that Mr. Williams directed while working at Becton Regional High School.

Board of Education President Mr. Lawrence Bongiovanni then followed the performance by presenting Ms. Carol Williams and their children with a plaque.

At the conclusion of the ceremony, Ms. Williams spoke to the audience. “He loved his chosen profession. He was a teacher. There was no better description of Jim. He was really sharp and funny. He has a big smile on his face right now. I just know it,” she said.

“Although James Williams spent years directing student and faculty productions, his main role within Becton was a “fun” physics teacher. From the speeches and conversations on October 22, it was evident, long before the benefits of technology, that Mr. Williams made science come alive,” said Becton Principal Dr. Sforza.

“He mastered and clearly understood that the secret to teaching was to teach the “whole child” and to teach the whole child one must understand and appreciate students inside and outside of the classroom by becoming a “whole teacher.”  He understood that there was a direct, positive and powerful correlation between working with students on stage and on the field and inspiring them in the classroom,” he added.

The current superintendent of Becton Regional High School, Mrs. Clarke, had the pleasure of working with Mr. Williams from 1981 until his retirement. She describes him as “a bright man with a dry sense of humor” and “always a gentleman” and noted that he did a lot for the students of East Rutherford and Becton not only in his physics classes, but also through is ability to direct theatre.

“I can’t imagine a more fitting place to be named after him,” said Mrs. Clarke.