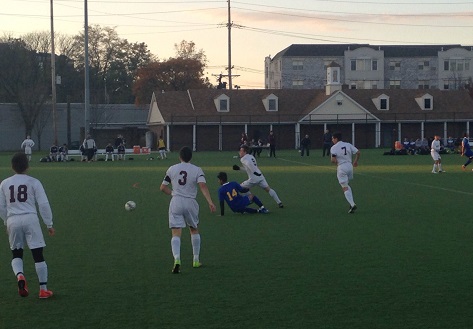 Becton’s Senior Night was a huge success for both the girls’ and boys’ soccer programs. The games were memorable, bringing a sense of excitement to all seniors involved, on and off the field.

The boys’ team played St. Mary’s and won 4-1, bringing their overall record to 9-7. Although it was an extremely emotional night for all of the senior players, having friends and family there for support was a feeling beyond explanation.

“It was a great atmosphere playing under the lights with such an energetic crowd,” said Assistant Coach Brendan Cronk, insisting that the team fed off the fans’ positive energy.

Moving on, the girls’ team played Immaculate Conception on Oct. 24 and defeated them 3-0. They ended their regular season with a record of 10-7, the most wins achieved since 2011.

For both teams, it was believed that Senior Night would be the last time playing on their home fields. However, it was with great enthusiasm that both teams were able to clinch a home game for the first round of States.

Captain David Riano said, “It was the opportunity that we got that mattered. Regardless of the outcome, it was our success that defined us more than our failure.”

For the girls, this is the first State game played on home turf in Becton Wallington Girls’ Soccer history.

Captain Devyn Di Meola expressed, “We were all really pumped for this game, especially the seniors. We’re not ready to end our season yet.”