51 Years of Earth Day: Recognizing the issue of climate change and what you can do to make a difference. 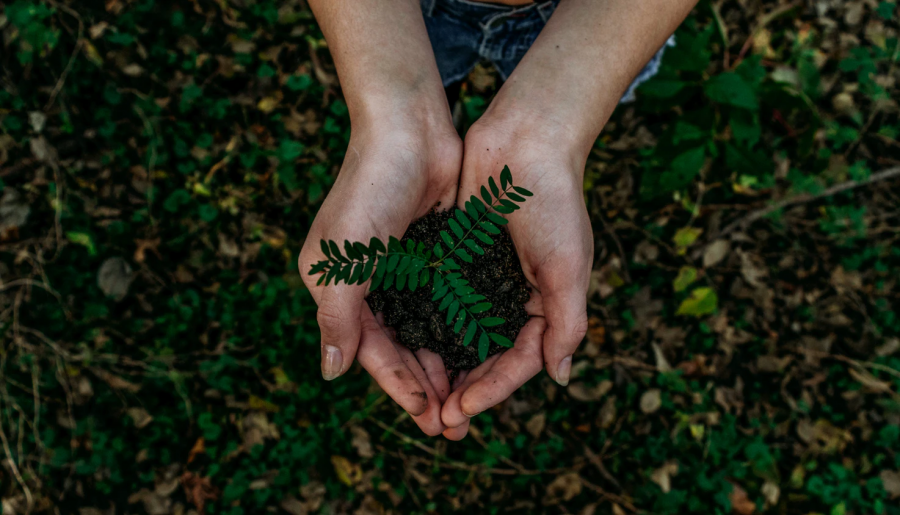 Noah Buscher’s “Earth and I” illustrates a clear message about working to improve the environment and our ecosystems. Depicting this image of a plant being grown in the hands of a person, it sheds light on the hope that if we change our ways and contribute to a sustainable lifestyle we can improve the planet’s health.

Devastating fires rage on throughout California and Oregon, droughts persist in the southwest, floods hit record high numbers in Europe and Africa, and waves of heat infiltrate Greenland. Every day, the effects of climate change are prevalent and exist to destroy our home. Even in communities in New Jersey and the tri-state area, we see the catastrophic remains of hurricanes Irene and Sandy. Hurricanes and other disasters are subject to several climate change-related influences. Warmer sea surface temperatures intensify tropical storm wind speeds, delivering more damage if they make landfall. Sea level rise is likely to make future coastal storms, including hurricanes, more damaging. Due to this, recognizing your carbon footprint and working toward a more sustainable lifestyle will assist in nurturing and preserving the planet.

By the early 1960s, Americans were becoming aware of the effects of pollution on the environment. Rachel Carson’s 1962 bestseller Silent Spring raised the specter of the dangerous effects of pesticides on the American countryside. Later in the decade, a 1969 fire on Cleveland’s Cuyahoga River shed light on the problem of chemical waste disposal. Until that time, protecting the planet’s natural resources was not part of the national political agenda, and the number of activists devoted to large-scale issues, such as industrial pollution, was minimal. Factories pumped pollutants into the air, lakes, and rivers, with few legal consequences. In fact, the oil industry’s leading pollution-control consultants advised the American Petroleum Institute in 1968 that carbon dioxide from burning fossil fuels deserved as much concern as the smog and soot that had commanded attention for decades. However, big, gas-guzzling cars were considered a sign of prosperity. And as a result, only a small portion of the American population was familiar with, let alone practiced, recycling.

Earth Day was founded on April 22, 1970, as a day to educate about environmental issues. Elected to the U.S. Senate in 1962, Senator Gaylord Nelson, a Democrat from Wisconsin, was determined to convince the federal government that the planet was at risk. In 1969, Nelson, considered one of the leaders of the modern environmental movement, developed the idea for Earth Day after being inspired by the anti-Vietnam War “teach-ins” that were taking place on college campuses around the United States. According to Nelson, he envisioned a large-scale, grassroots environmental demonstration “to shake up the political establishment and force this issue onto the national agenda.” By raising public awareness of pollution, Nelson hoped to bring environmental causes into the national spotlight.

Nelson announced the Earth Day concept at a conference in Seattle in the fall of 1969 and invited the entire nation to get involved. He later recalled, “The response was electric. The American people finally had a forum to express [their] concern about what was happening to the land, rivers, lakes, and air—and they did so with spectacular exuberance.”

On the first Earth Day on April 22, 1970, rallies were held in Philadelphia, Chicago, Los Angeles, and many other American cities, according to the

Environmental Protection Agency. Denis Hayes, a young activist who had served as student president at Stanford University, was selected as Earth Day’s national coordinator. He worked with an army of student volunteers and several staff members from Nelson’s Senate office to organize the project. According to Nelson, “Earth Day worked because of the spontaneous response at the grassroots level. We had neither the time nor resources to organize 20 million demonstrators and the thousands of schools and local communities that participated. That was the remarkable thing about Earth Day. It organized itself.”

During the 1970s, several important pieces of environmental legislation were passed, among them the Clean Air Act, the Water Quality Improvement Act, the Endangered Species Act, the Toxic Substances Control Act, and the Surface Mining Control and Reclamation Act. Another key development was the establishment of the Environmental Protection Agency in December of that same year. The EPA was tasked with protecting human health and safeguarding the natural environment—air, water, and land.

Since 1970, Earth Day celebrations have grown. In 1990, Earth Day went global, with 200 million people in over 140 nations participating, according to the Earth Day Network (EDN), a nonprofit organization that coordinates Earth Day activities. In 2000, Earth Day focused on clean energy and involved hundreds of millions of people in 184 countries and 5,000 environmental groups, according to the EDN. Activities ranged from a traveling, talking drum chain in Gabon, Africa, to a gathering of hundreds of thousands of people at the National Mall in Washington, D.C. Today, the Earth Day Network collaborates with more than 17,000 partners and organizations in 174 countries. According to EDN, more than 1 billion people are involved in Earth Day activities, making it “the largest secular civic event in the world.”

Burning fossil fuels such as natural gas, coal, oil, and gasoline raises the level of carbon dioxide in the atmosphere, and carbon dioxide is a major contributor to the greenhouse effect and global warming. You can help to reduce the demand for fossil fuels, which in turn reduces global warming, by using energy more wisely. There are many steps you can take to improve the environment, even in the comfort of your own home. These include buying products with minimal packaging to help reduce waste, turning down the heat and using less air conditioning, buying energy-efficient products, driving less(carpooling) or taking other modes of transportation, using less hot water, and turning off and unplugging appliances when you’re not using them.

The issue of climate change is not a recent nor minor issue, in fact, the consequential results have demolished ecosystems and brought wildlife to near extinction. Reducing greenhouse gas emissions to fight climate change will require drastic measures, however as we observe this Earth Day 2021, we can take a step back to acknowledge the contribution that we make to this dire problem. After all, it is our responsibility to protect our home.