The Little Things is an absolute must-see movie. 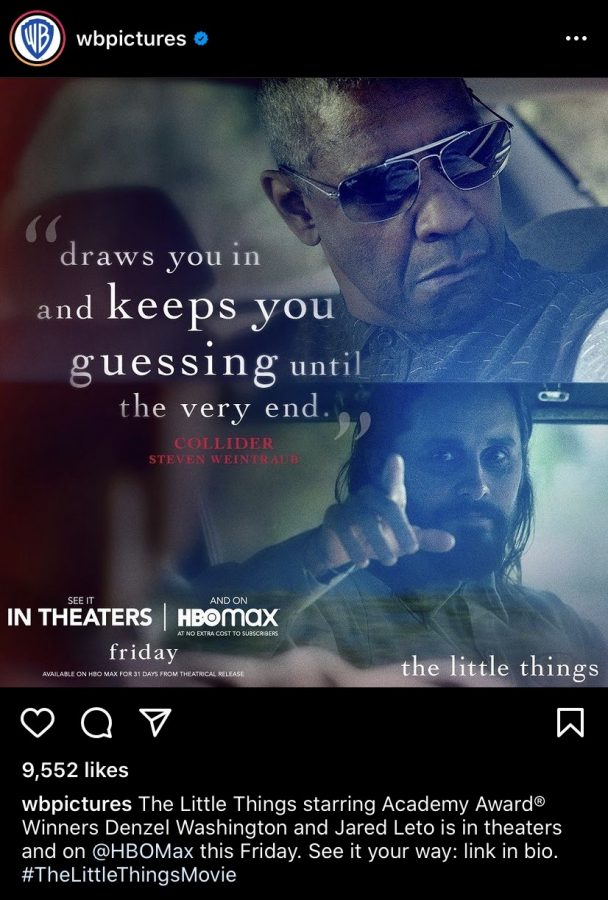 The Little Things (rated R) is available to stream on HBO Max.

The Little Things is an absolute must-see movie. It is a thriller and filled with many plot twists. The movie stars Jared Leto as Albert Sparma, Denzel Washington as Deke (a deputy sheriff), and Rami Malek as detective Baxter. When asked about the movie’s plot, while doing promotional press, Jared Leto perfectly described the genre, “It’s a classic American crime thriller that subverts the genre a bit, it makes you ask a lot of questions, sometimes it’s scary, sometimes I think it is quite funny”. Some scenes are more gruesome and revealing than others which have to be taken into consideration before watching the movie.

The story takes place in Kern County, California, where there have been multiple human corpses discovered, all seemingly stripped of their clothes and propped up in a certain position. Detective Baxter is in charge of finding the killer who seems to always get away and leaves little to no evidence behind, he partners up with Deke but he is warned not to trust him by his fellow officers. The mystery of why, the movie reveals, but of course Baxter partners up with Deke, and we are along for the ride.

They both evaluate the crime scenes, as best as they can, while this is going on, we also see Deke experience hallucinations of these deceased girls. We can tell Deke is attached to this case as he also experiences some sort of flashbacks to a specific case he had worked on earlier in his years, this becomes important later on.

While on their hunt, they do not find much to go on, however, Deke finds a few pieces of possible evidence that could lead him to something other than a dead-end in the case. He follows this lead and he finds himself meeting Albert Sparma played by none other than Jared Leto.

Albert Sparma raises some suspicions and he is the only possible suspect. Deke and Baxter throw the ‘book’ out the window as they attempt to find any solid evidence against Albert. Albert is a peculiar person, he has a certain sense of humor that is not like any other, he is also into crimes, is smarter than he may look, seems to have no friends, a constant regular schedule, and overall he is a mischievous person.

But this is not your typical detective-genre, and the ending of this film will surprise you. As sophomore Jacqueline Carino explains “Even if you somehow saw the ending coming, it’s still shocking and you are faced with a sudden realization as to what just occurred, then the pieces really start to come together.”

Though this is a two-hour movie, it is one of those few movies that are genuinely worth all the time put into it, it’s even great to rewatch.

The actors did a phenomenal job, they embodied their characters perfectly. While watching this movie, you should pay close attention to what is being said even those scenes that may not feel significant, after all, it is often the little things that are the most important.

The Little Things is rated R and is exclusively streaming on HBO Max. The movie contains gruesome and harsh language, and viewers under 17 should be accompanied by an adult.