Among Us: The Great Deceiver’s Playground 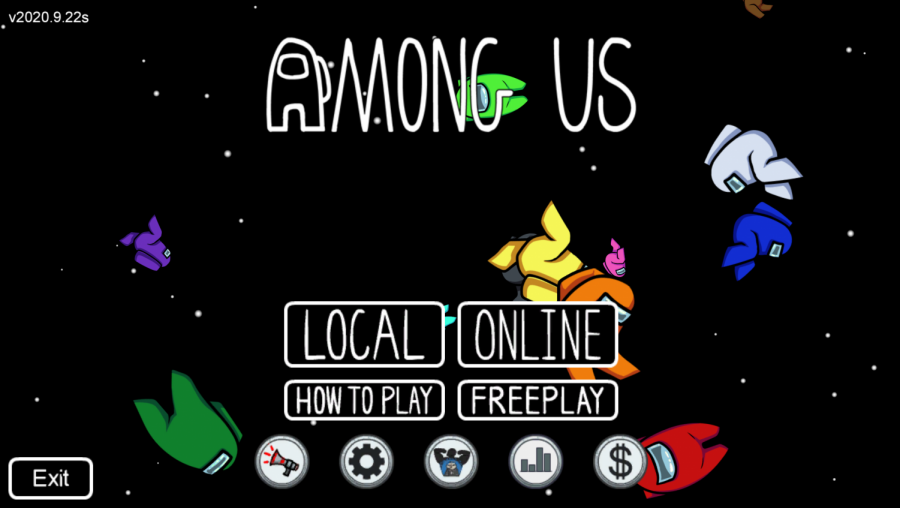 Courtesy of Among Us)

Among Us is not a new game, but it's popularity has increased during a tough year.

Trust nobody, fear all. One simple 2D video-game full of lying and deceiving, and specializing in ruining friendships, has become the most prominent thing on the Internet right now. Among Us is taking the world by storm, and this storm will not subside for quite a long time.

Among Us is a 4-10 player video game in which the best at deception win. Among Us characters are called Crewmates, and the aim of the game for the Crewmates is to “complete all your tasks” which could consist of fixing electrical wiring within the settings, or fueling engines for the spaceship, for instance. Depending on the number of players and the settings that the players choose, there will be 1-2 players who are supposed to act like Crewmates but are actually serial killers trying to eliminate and stop the Crewmates from completing all their tasks in the aforementioned places. These fake Crewmates are called the Impostors. If the Impostors eliminate all the Crewmates before they finish all the tasks, the Impostors win.

Among Us was created and released by a small group of developers going by the collective name of InnerSloth on June 18th, 2018. At the beginning of the game’s lifespan, unfortunately, the game was not very popular. The game was so unpopular that on the biggest video game sales market for computers, Steampowered.com, the game had a peak player count of only 17 players playing at once in December 2018, six months after its release. The game would remain under the radar until the summer of 2020, two years after the game’s release. While InnerSloth was working on developing Among Us 2 in an attempt to have better ratings and player counts, a popular live-streamer on the website Twitch.tv, screen name ‘Admiralbulldog’, was suggested to play the game for his audience while streaming. Due to the accessibility of the game, (being free on mobile devices, and $4.99 on computers), the game spread like wildfire across the internet. Not only was it free to play, but the game did not require any professional gaming computers to run, which made the game even more accessible for a variety of people.

Some of Becton’s best were interviewed and asked about their impressions of the record-breaking game. Sophomore Vincent Guminski shared, “I like that it is a party game you can play with a lot of your friends, and I like how you have to think a lot in the game, it’s like a puzzle.” While Sophomore Alejandro Tolentino offered a more critical point of view, “there should be changes to the game. I think there should be a bigger maximum amount of players in one lobby, more color customization options for the Crewmates, and more playable maps for the game.”

To elaborate on the sheer size of the fanbase, Among Us gets an average of 151,538 viewers on Twitch daily, and has a peak viewer count of 753,943 viewers as of October 21st, 2020. Just recently, on October 20th, U.S. House Representative Alexandria Ocasio-Cortez, commonly known as AOC, had her gameplay live-streamed on Twitch and amassed a whopping 439,000 viewers in ONE stream as she played Among Us. She shot her way up to third for most viewers on a single individual’s live-stream, losing only to the most popular streamer on the platform, “Ninja”, when he played with famous hip-hop artist Drake in another record-shattering video game, “Fortnite”. The most-watched Twitch.tv streamer (in overall watch time), “xQcOW”, also plays the game and is consistently one of the highest viewed channels on the entire platform. September 2020’s peak player count on the aforementioned video game platform, Steam, was an impressive 438,524 players, giving Among Us the 7th highest peak player count on the website, over the last 17 years.

Do not count out the other side of the internet, though. On YouTube, an Among Us video reached #2 on Trending on YouTube. In a video by MrBeast, one of the most respected and watched creators on the platform, with 44.5 million subscribers, had one of his “Among Us” videos gain an astounding 6 million views in just one day. Other popular creators on YouTube such as “PewDiePie”, 107 million subscribers, also play the game, as well as celebrities such as rapper, Soulja Boy. This doesn’t even include the most popular app on the internet right now, TikTok, which constantly streams Among Us videos on its “For You” page.

Pop-culture has been overwhelmed by the monstrous fan and player-base of “Among Us”. From tweens to adults, the game is sure to be a hit for years to come.