Columbus Day or Indigenous Peoples Day: What are we celebrating?

The following editorial is the viewpoint of the writer only and does not reflect the opinions of the Cat’s Eye View staff, as a whole, or the administration, faculty or students of Henry P. Becton Regional High School. 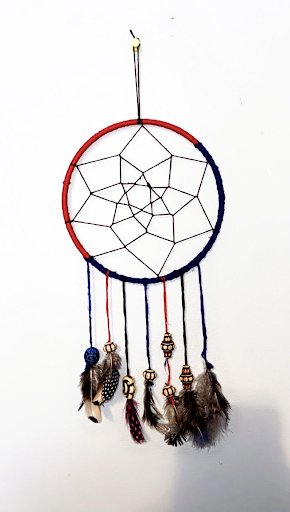 Becton art student, Tenzin Woser, created a dream catcher as a symbol of oneness among numerous indigenous cultures and regions.

The query of what exactly we’re celebrating on October 12 has gotten more attention in recent years, but it has been ongoing for decades. On October 12, 1792, the first recorded celebration of Columbus Day in the United States took place. It was organized by the Columbian Order, which is also known as the Society of St. Tammany, and commemorated the 300th anniversary of Columbus’ arrival. Columbus Day is intended to memorialize the supposed discoverer of America, but the eminence of Columbus has been a constant controversy. Multiple current documents display the atrocities he committed against those he encountered. Many sources including his journals, exhibit accounts of slavery, exploitation, and sexual abuse of natives. These discoveries have led to protests against the national holiday, and to repeal and replace it with National Indigenous Peoples’ Day. Many states, cities, and municipalities are recognizing and celebrating Indigenous Peoples’ Day in place of Columbus Day. This honors and celebrates the history, heritage, and culture of Native Americans.

October 12th was initially a day to celebrate the arrival of Christopher Columbus in the Americas and his “discovery” of the New World. The majority of those in this country have been taught an inaccurate history of Christopher Columbus and his journey to the Americas. They were taught a history of Columbus that erases the violence of his actions and attitudes. Columbus didn’t “discover” the Americas because millions of Indigenous people already inhabited the land, and he committed countless acts of cruelty once he arrived. Historical accounts show that he brutalized, killed, and enslaved the Indigenous people and led the way for future colonizers to do the same throughout the Americas. The violence of Columbus and colonization should not be idolized in history or honored with a holiday. Today is an opportunity for us to acknowledge the reality of our nation’s history, honor the long-standing contributions and identities of Indigenous peoples, and fight for their representation, equality, and justice.

In regards to these aspects, masses of people have been opting to celebrate Indigenous Peoples’ Day instead of Columbus Day. This change allows the opportunity to bring more awareness to the unique, deep history of this land that is very much tied to the first peoples of this country.

Indigenous Peoples’ Day is celebrated in hopes of pushing away this invisibility and absence of equality.

Becton Sophomore, Emily Amaya says, “Indigenous Peoples’ Day, to me, means a day where light is brought to my culture. A culture that isn’t widely spoken about, but has left such a tremendous impact in history. It celebrates and honors the accomplishments and contributions of Indigenous peoples, which I think we need to pay more attention to.”

Emily and others vocalize that there is little to no representation for Indigenous peoples and that we do not learn enough about Native American history. Things that are important to her are Indigenous art and traditions. “These are things that hold a lot of meaning about the belief and events of our ancestors and their history. I want to continue to connect to my Indigenous culture and learn more about my roots.” She vocalizes.

The images to the left depict dreamcatchers created by Becton art students as a symbol of oneness among numerous indigenous cultures and regions. The dream catcher represents, to many, a general indication of Native American identity. However, some Native Americans believe dream catchers are being commercially misused and offensively exploited by non-Native Americans.

Culture and language are the identity cards of indigenous peoples, giving them the opportunity to have their own life.

Their heritage and spiritual values enabled them to resist the colonialism that existed. Indigenous people should continue to be celebrated and honored for all they have had to endure and all they continue to undergo. Small contributions include: raising awareness for Native American issues, educating yourself and others on Native American history, donating to programs that support Native communities, volunteering or visiting a reservation, and purchasing from Natives. These are small steps you can take to support Indigenous peoples and help preserve Native culture.