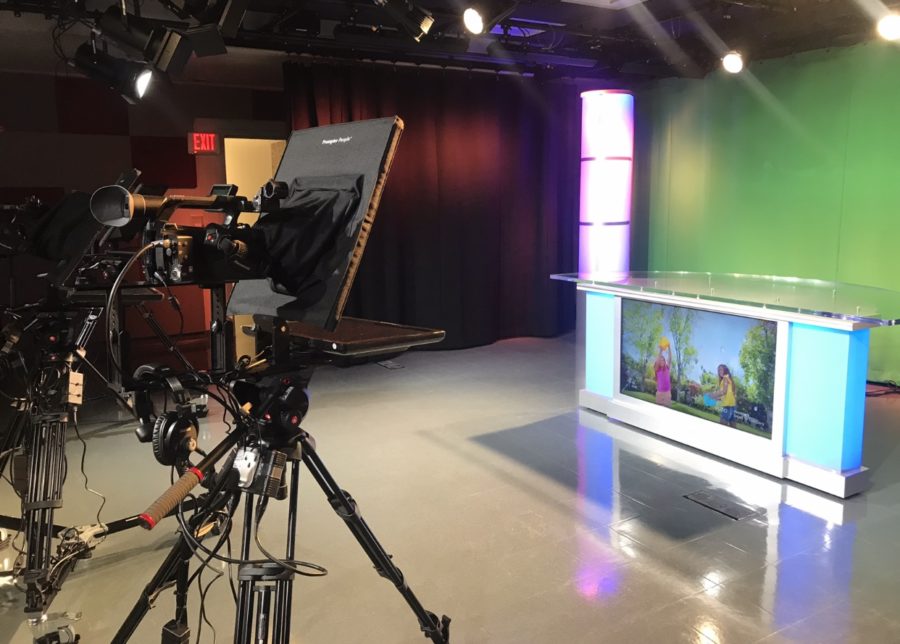 In the spotlight of the new Katherine Wickle-Ochipa Production Studio

At the start of the new school year, Henry P. Becton Regional High School unveiled the nearly $850,000 Katherine Wickle-Ochipa Production Studio. The studio is dedicated to Wickle-Ochipa, due to the costs of the studio being partially covered by her generous endowment. “[Ms. Ochipa] wanted to make sure that she gave back to someone; that was from her heart, and we wanted to make sure that we honored her in that same respect,” said Dr. Sforza. Ms. Wickle-Ochipa grew up in Carlstadt, NJ before moving to Pompton Plains in 1956. She spent her life dedicated to work and service; first as a controller for Fette Ford and later at Chilton Hospital in Pompton Plains. Everyone who has known her expressed how Ms. Wickle-Ochipa always emphasized the importance of giving back to one’s community, making her choice to provide a scholarship true to her charitable character. In addition, the studio was done in partnership with Montclair State University, who recently constructed a $55.8 million headquarters for their School of Communication and Media.

The late Katherine Wickle-Ochipa, a Becton 1942 graduate, left the school a $1.2 million endowment to be used for scholarships. At the dedication, one of the scholarship’s first recipients, class of 2014’s, Nikki Dombrowski, was able to share a few words on how the scholarship has impacted her. “At such a point in your life, when you’re unsure whether you want to stay where you are in your career, having this to fall back on is amazing. If I didn’t have it, I don’t think I would enjoy life the way I do today because I don’t think I would even be able to afford a gym membership, at this point. I am very grateful for the Wickle family and all they’ve done for me. I am so happy to have created a relationship [with them] because now I think it has gone beyond just the scholarship. I know so much about Katherine,” shared Miss Dombrowski. Gesturing to Ron Wickle, she continued, “I know so much about your family and I feel very blessed to know all of you.”

When Dr. Sforza reached out to the family earlier in the process, they discussed how Becton is ‘extremely progressive and innovative’ when it comes to implementing programs. Katherine’s nephew, Ron Wickle, asked many questions in regards to how the studio will affect the school and the community. “Because of the large generous donation, we know that, with interest, it would be a lifetime worth of scholarships. We approached the Wickle family and asked if they would be interested in funding some other school projects with part of the endowment and they agreed. Of the $1.2 million, $350,000 was used specifically to fund the new studio, giving the honor to dedicate it this evening in her name,” said Superintendent and Principal, Dr. Dario Sforza. Over the next 70 years, Becton will be able to annually award two Becton seniors a $5,000 scholarship in Ms. Wickle-Ochipa’s name.

Moreover, Dr. Sforza hopes that with expanding Becton’s media and communications programs to match those offered at the county level it will enable parents to keep their students in the district. “With the construction of the studio, our media and communications programs have matched and exceeded the programs offered at county technical schools; what we were lacking before was the actual studio and specific courses,” said Dr. Sforza. The importance of this studio is clear. “When you see something, have a visual, it makes an imprint on your mind…and gives us the experience of it” added Mrs. Amanda Colangelo, the broadcasting teacher.

Dr. Sforza found that the most challenging part of constructing the studio was scheduling the different contractors and subcontractors to finish the different pieces of the job before the new school year. When Becton went through a $28 million renovation in 2014, the architect set aside two small rooms on the first floor to be the Production Studio.

Those rooms were equipped with soundproof glass and the only thing missing was constructing the actual studio. Over the past few years, the rooms were used as an Athletic Director’s office and an in-school suspension room. When the idea of constructing the studio came to light again, the school decided to move it upstairs where two of the Mac labs would be repurposed. As explained by Dr. Sforza, “With the addition of going digital, we went from having three computer labs to having every classroom being a computer lab due to the 1:1 Chromebook initiative”.

Moreover, Montclair State University helped the district in ensuring the right equipment was purchased and that it was equal to or better than the ones used in professional settings. While, Mr. Caputo, Director of Building and Grounds, went with an NYC-based company to do the lighting, the technology and equipment for the studio was purchased from Varto Technology, which is based locally in East Rutherford. At the ribbon-cutting ceremony, president Varto Keshishian discussed the impact the studio will have on students, “I talked with everyone here and we came up with a proper design and then [we were] able to build a studio that generational students will be able to have future [media and production] careers in”. Mrs. Colangelo echoed this sentiment. “We live so close to [New York] city and there are so many opportunities in this field, that it’s important to provide the students with the equipment and production skills,” explained Mrs. Colangelo.

The dedication was also attended by Brian Thompson of NBC NY news. Thompson helped open the studio with a speech about the changing landscape of journalism, “…it has been a long change, but that change has been so dramatic in the last few years because of this (holding up his cellphone) and you have to realize, this thing is only 10 years old…and it has upended everything. This was really the catalyst that makes everything so much different now.”

Mr. Thompson also referenced Miss. Dombrowski’s remarks made earlier in the night. “[the production studio] will give people, your students, your young ones up and coming, a great opportunity to get their feet in the door [and] to decide if this is something they want to do”. Mr. Thompson continued, “This is the sort of thing high schools didn’t used to do when I was growing up…but this is wonderful…to think that the family and [Ms. Wickle-Ochipa] could be so generous to give students such a head start like this, you are all very, very fortunate.”

The need for access to these 21st-century tools is something that Becton has been emphasizing in recent years. The administration and teachers have even started the process of becoming a Future Ready School® which would provide students with the skills required to be productive citizens in our ever-changing, technologically connected society. Perhaps Mrs. Colangelo said it best, this studio will provide “a doorway into the rest of the world”.

Check out our gallery: Behind the scenes of the new production studio.