Becton football: players and fans start the season off right 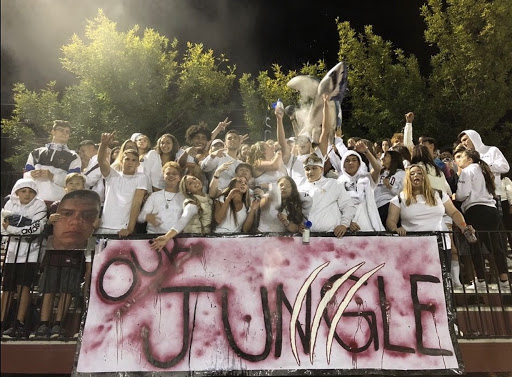 This past summer, the town of East Rutherford renovated its’ turf football field. The former field reached a survival life of ten years in 2014. According to Dr. Dario Sforza, superintendent and principal of Henry P. Becton Regional High School, the field had “started warping and fading”. Dr. Sforza cites East Rutherford mayor, James L. Cassella, as having been tremendously involved in the restoration process and wished to thank the town of East Rutherford for managing the financial aspects of the field, as well as, the Carlstadt mayor,  and city council involved. The whole transformation costs approx. $1.2 million, including the soon to be completed soccer field, track, and baseball field. The Wildcat’s first home game on September 13th was the first time the field was open to the public since being closed in early August.

In addition to the turf replacement, the scoreboard was also in desperate need of an update. It was evident last season of the scoreboard’s age when it would not properly display scores. The contractor was able to preserve the top portion of the scoreboard as a part of history, and refurbish the rest. The scoreboard cost an additional $20,000 to update. “We made the field future-ready, the Wildcat logo is twice the size in the middle and [the] field is two-tone, similar to an NFL field. This is all thanks to the Department of Public Works, our Athletic Director [Annette Giancaspro],  Beckmeyer Engineering, and Sanzari”. Dr. Sforza is referring to Joseph M. Sanzari inc. who provided the construction management. The field was also updated to include Lacrosse and Field Hockey markings, in case, one day the school was to implement those teams. Dr. Sforza said that no talks about having a Lacrosse team have come across, however, he did not rule out the possibility. “We would need student surveys, community forums, and parent forums…in addition, the school would need to assess how much it would cost and whether it would interfere with other sports. As of now, there has been no discussion on whether or not it will be added, if they do though, we are now ready to.”

Glenn Beckmeyer, the town engineer, visited other schools’ turfs and is very well educated in turf fields, as he helped with the original turf field years ago. “Riggin Field went through an exterior renovation last year. The town added a pole vault and all the other track & field and cross country specifications, which will now allow us to hold county and state tournaments,” said Dr. Sforza.

Before the opening of the new field, the Becton Jungle traveled all the way to North Arlington, on September 9th, to support the football team’s first away game, with a Hawaiian theme. The students were decked out with leis, hula skirts, Hawaiian shirts and ready to say “Aloha” louder than ever. Our Jungle got the cheerleaders so hyped, that between them both, our boys were very encouraged. Junior cornerback Marcus Duran suggests that the team has “something special this year, we’re a very connected group”. The upperclassmen accepted the challenge to lead the team and two freshmen played hard for Wildcats, as well. Freshman, Jayden Alvizio started as a right tackle with Freshman middle linebacker, A.J. Arroyo on the field. Led by quarterback, Joe Crifasi, Becton football was able to score 7 touchdowns. When asked about the season, Crifasi said the players have “a pretty good bond on and off the field which makes us play better.” The Becton cheer from both the field and stands led the Wildcats to their first win, with a final score of 47-12.

On Friday the 13th, Becton hosted its initial pep rally of the year with a whiteout theme. Students in all grades decked out in their best all-white outfits (or at least mostly white) to support our athletic department. Junior cheerleader, Lauren O’Shea talked a little about the cheerleaders’ preparation for the big day, “we started practice in August; there were a lot of things we needed to get done to perform at the pep rally. It was a success.”

The students were very energetic, especially the senior section, with their posters and floaty toys. Chef Perdomo of the BHS culinary department described the student section as “pretty wild, it was wild out there”, clearly living up to their mascot. Each fall sport was given their special moment to call down their players; student-athletes from the: football, volleyball, soccer, cross country, and tennis teams entered the gymnasium to great fanfare and applause. Some even demonstrated their dance moves.

Sophomore, Anthony Berrios noted that he “like[s] that the pep rallies are always student-based”. This sentiment was echoed by many in attendance.

Senior Julianna Micco said, “the pep rally was super fun, it really gets everyone excited to go to the football games!” The band was also a fun addition to the pep rally with the backup of the brand new Color Guard. Baritone and trumpet player Giancarlo Sanchez described his admiration for

the band, “I love playing at the pep rallies. Though we’re small, we aim to grow every year to become one of the best in the district” Both have been working tirelessly to put on a very entertaining display. Overall, we started the school year off right with a roaring pep rally. All of this excitement was leading up to the big game: the first home game of the season. Becton’s Jungle continued the whiteout from the pep rally, but to a much bigger extent with the addition of baby powder and white paint everywhere. There was a huge turnout from Carlstadt and East Rutherford, with family and friends packing the stands. Chef Perdomo says the team has “a lot of promise, and a lot of new young players” and wished them luck on the season. Unfortunately, Becton football was not able to defeat Cresskill with a final score of 42-22. Friday, September 20th, the Becton Wildcats hope to earn another win with a defeat of Hasbrouck Heights, away. You can support the team by showing up in your best reds, whites, and blues.