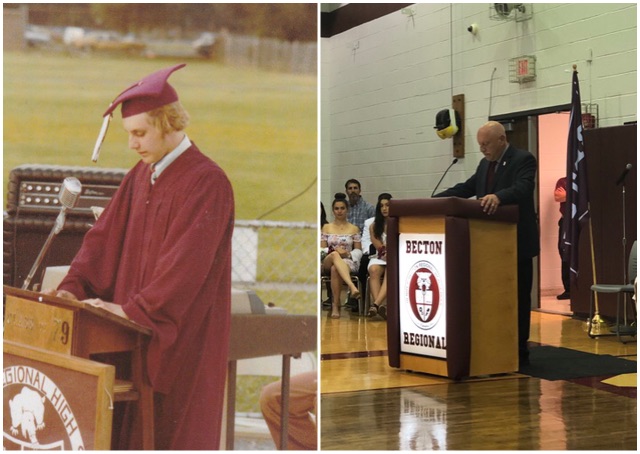 “Strike another match, go start anew, and it’s all over now, baby blue” was the message of Becton Board of Education President Dennis Monks’ speech at his commencement ceremony exactly four decades ago when he was president of his senior class.

At the Class of 1979 graduation, Mr. Monks discussed concluding a comfortable chapter in one’s life and embarking on a new one, which would be filled with not only uncertainty but also great possibilities.

Fasting forward 40 years, he continues to quote singer and songwriter Bob Dylan. “May God bless and keep you always, may your wishes all come true, may you always do for others and let others do for you. May you build a ladder to the stars and climb on every rung, and may you stay forever young,” he announced on June 20.

The theme of last night’s commencement address was to recognize specific groups of high school students “like those attending college because of their choice to continue education and those entering the workforce because they are the backbone of our country.”

But the group of students who Mr. Monks feels the strongest about is those who will be joining the military. “They will join the brave men and women who currently serve and those who have served before them to keep us all safe under the blanket of freedom.”

The Class of ’79 graduate recalls being motivated to run for office by a specific group of classmates. “Back in the 70s, the students socialized in groups, such as the high academic achievers, those whose main focus was sports, the trade school students, and the individuals that were none of the above but rather happy-go-lucky, fun-loving students,” he said.

“I fell into the last group,” he explained.

The Becton alumnus continued to point out that back then the trend was to choose someone at the top of the class to be president, but his group of friends felt it was time for a change and elected someone who would represent all the students of the senior class.

He further recalled never allowing a classmate to be bullied, harassed or subjected to peer pressure. He got along well with all types of people and stuck up for the students that did not socialize with anyone and kept to themselves.

The board president mentioned that what helps him most throughout his career wasn’t learned in a regular classroom setting. Instead, he credits his job as Fire Marshal of East Rutherford because it requires speaking publicly and being an active member of his high school plays. “Performing taught me how to stand in front of large groups and speak without fear. It is one of my fondest memories of high school.”

As a class officer and now president of the high school’s board of education, Mr. Monks credits his parents and the fire service for his leadership abilities. “My dad was a lieutenant colonel in the Army, and my mom was very strict,” he said. “You had curfews and chores and had to keep your grades up.” Similarly, the fire service taught him discipline along with respect. “As a chief, you must lead through difficult times and make life-changing decisions.”

His advice for anyone looking to become a leader is to start young, not be a follower, and chart your own course. “Leadership starts with being your own person and making your own decisions.”

“Mr. Monks comes from a long line of Wildcats and truly exemplifies what it means to be a Becton Wildcat. His dedication to the larger school community, selfless service to the Board, and collaborative leadership have been admirable,” said the acting superintendent/principal of Becton Regional High School, Dr. Sforza.

“As a class president from 1979 and current Board President, he is able to provide leadership with moving the district forward while clearly understanding and preserving its rich history,” he added.

Mr. Monks’ children are also Wildcats at heart. His son, Dylan, graduated in 2013 and is serving in the United States Navy, and his daughter, Sarah, graduated in 2016 and is studying information technology in college.

His parents, Joan and George, met in the early 1950s and both graduated from East Rutherford High School. His brother, George, was a member of Becton’s Class of 1975, and his younger brother, David, was also senior class president of his graduating class in 1982.

“My wife, Pat, was born and raised a Clifton Mustang but became a Wildcat when our children were in school,” he said. “She dressed up as the mascot at many sporting events throughout our children’s education.”